“After the wind an earthquake, but the Lord was not in the earthquake”

“Not even God can explain why children die crushed by the ancient stones of our countries.” A contribution on Earth time and the meaning of life by the economist Luigino Bruni, who is located on places, for him familiar in earthquake.

The bell tower of the Amatrice church that marks 3:36, has a strong image to say what happened tonight.

That minute was the last minute for many victims, one minute will be remembered forever because it will be engraved in the flesh and in the hearts of their families, and will be remembered by our country, whose recently a series of clocks stopped forever by the violence of people or that of the earth.

Even I’ll remember this forever, because this scream of the earth has also reached the house of my parents in Roccafluvione, about twenty km from Arquata in Tronto, where I was going to visit them.

A long night of fear, of pain, of thoughts for Amatrice, Arquata, Accumulations, regions of my childhood, near the villages of my grandparents, in the villages where in summers I accompanied my father who worked there as a street seller of chicken.

And then thoughts, thoughts that we never have, because it can be done only in the terrible nights. 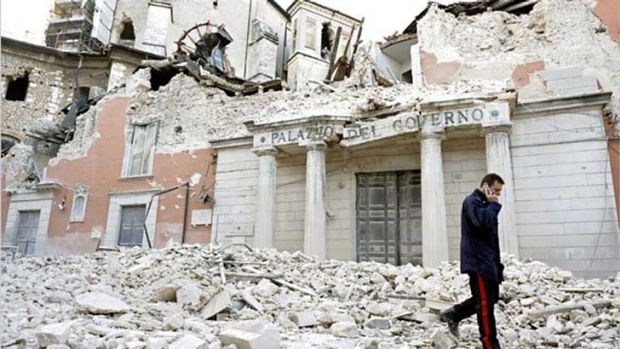 I thought that the time measured by the bell tower clock until 3:36, which was blocked there, dead, was only one dimension of time, what the Greeks called Kronos, but that was only the surface, the soil of time.

In the world there is our time managed, domesticated, constructed, used to live.

And I thought that we are not the masters of this other time, more profound, abysmal, primitive, that does not follow our pace, sometimes against the steps of those who walk over.

And during these terrible nights that we become aware of other times which we walk and build our house, a new certainty is born that we are just grass in the field, watered and fed from heaven, but also engulfed by the earth.

The earth, the real one and not that romantic and naive ideology, it is like mother and stepmother.

The humus creates man but it does also return him into dust, sometimes good in the right moment, but sometimes bad, it comes too soon, with too much pain.

The biblical humanism knows very well, and for that I struggled a lot against the pagan cults of neighboring peoples who wanted to make the earth and nature a deity: the strength of the earth has always fascinated men who have tried to buy it with magic and sacrifices.

And so, as I tried in vain to get back to sleep, I thought of the terrible books of Giobbe and Ecclesiastes, which is perhaps understandable during these nights. These books tells us that no God, not even the real one, can control the earth, because even He, once He enters into the human history, will be a victim of the mysterious freedom of His creation.

Not even God can explain why children die crushed by the ancient stones of our countries, and He can not explain why He does not know, because if they knew it, it would be a monstrous idol.

God, that today looks after the earth of the three A (Arquata, Accumulations, Amatrice), can only do the same as our questions: can scream, silence, cry with us.

And maybe we have to remember the words of the Bible that everything is vanity of vanities: all is steam, breath, wind, fog, waste, nothing, ephemeral.

Vanity is written Hebel in Hebrew, the same word of Abel, killed by his brother Cain. All is vanity, all is Abel infinite: the world is full of victims.